ABOUT THE JUROR, STEPHANIE FOX KNAPPE 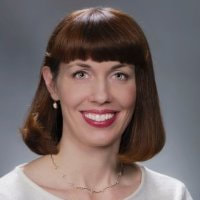 Dr. Stephanie Fox Knappe, Samuel Sosland Curator of American Art at The Nelson-Atkins Museum of Art, holds a doctoral degree in art history from University of Kansas where she taught several courses. She was the exhibition coordinator for the first traveling retrospective exhibition of the work of Aaron Douglas and served as acting curator, European and American painting and sculpture, at the Spencer Museum of Art at KU before joining the staff at the Nelson-Atkins. Knappe has published articles on a variety of topics and contributed to the exhibition catalogues Tales from the Easel: American Narrative Paintings from Southeastern Museums, circa 1800-1950; Aaron Douglas: African American Modernist; Romancing the West: Alfred Jacob Miller in the Bank of America Collection; and Go West! Art of the American Frontier from the Buffalo Bill Center of the West.

In addition to numerous small-scale shows often dedicated to American art on paper, Knappe has curated the featured exhibition Frida Kahlo, Diego Rivera and Masterpieces of Modern Mexico from the Jacques and Natasha Gelman Collection and served as venue curator for the Nelson-Atkins' featured exhibitions To Make a World: George Ault and 1940s America; Shared Legacy: Folk Art in American; Rising Up: Hale Woodruff's Murals at Talladega College; American Historical Epics: Thomas Hart Benton and Hollywood and for the upcoming Kansas City presentation of 30 Americans.

Knappe's doctoral work was supported in part through a resident fellowship at the Buffalo Bill Center for the West in Cody, Wyoming.  Knappe has served as a juror for multiple exhibitions, including the Heartland Art Guild Miniature Competition, the Symphony in the Flint Hills Fine Art Exhibition, the Missouri Valley Impressionist Society Art Show, and the Thomas Hart Benton Art Exhibition and Competition.